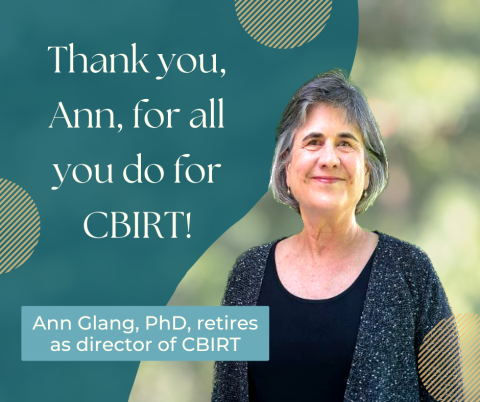 After 29 years, Ann Glang, PhD, retired from her role as Director of CBIRT on January 1, 2023. Ann’s professional accomplishments are many. She received her PhD in special education from the University of Oregon in 1987. Soon after, she and Dr. George Singer, a research scientist at Oregon Research Institute, were awarded their first federal grant on home and school support for children with brain injury. She then co-founded CBIRT in 1994 with Bonnie Todis, PhD.

Ann has secured and directed or co-directed over 30 federally funded research projects. Her research interests have included the design and implementation of individualized strategies and supports in the school setting for children and adolescents with brain injuries. Her belief was, and still is, that everyone, including those who have sustained a brain injury can best learn (and re-learn) knowledge and skills if the professionals who work with them use evidence-based instructional strategies. This remains the foundational principle that guides CBIRT’s work.

She has published numerous articles in refereed journals, edited two books on her work with children with TBI and developed online trainings and tools for educators and families in the areas of TBI management and injury prevention. Ann was awarded the 2011 Researcher of the Year award by the North American Brain Injury Society and the 2020 Outstanding Accomplishment NTTF Research Award by the University of Oregon. She has mentored numerous doctoral students and post-doctoral scholars in the development of their own TBI research programs, instilling a collaborative, team-oriented approach to CBIRT’s work.

Under Ann’s leadership CBIRT has continued to grow and expand into new areas. We are grateful for Ann’s many contributions and are pleased that she will continue in her role as Research Professor at CBIRT.